On the occasion of the 50th anniversary of the Stewart-Swift Research Center, the Henry Sheldon Museum of Vermont History invited an international network of collage artists to engage with historic material in the archive and to create a folio of collage prints that reflect on the idea of community in a 21st century world.

The project unfolds as a book, exhibition, folio of prints, and program series.

Kolaj Institute, Kasini House’s Art Meets History initiative, The Henry Sheldon Museum of Vermont History and its Stewart-Swift Research Center teamed up to produce a collection of collage prints that interpreted the museum’s archive material for a 21st century international audience, in celebration of the Research Center’s 50th anniversary. An exhibition of the prints took place September 2, 2022 to January 7, 2023 at the Henry Sheldon Museum and Kolaj Institute published a companion book about the project, Artists in the Archives. Lead Curator for the project was Ric Kasini Kadour, in collaboration with Eva Garcelon-Hart, Stewart-Swift Research Center Archivist, and Taylor Rossini, Henry Sheldon Museum Collections Associate. In addition, Kolaj Institute organized a residency for collage artists, who responded to a Call to Artists, on how to work with archives in May 2022.

Each of the collage prints speaks to an idea about community and how the historical material in the archive shapes our sense of community. The idea of community was interpreted locally, as in Middlebury, Vermont, but also in terms of what the material in the archive says about communities across Vermont, across New England, and, ultimately, in a globalized, 21st century world.

The project celebrates the 50th anniversary of the Stewart-Swift Research Center as a designated archival repository. Henry Luther Sheldon (1821-1907) established the Sheldon Art Museum in 1882 and dedicated the remainder of his life to its care and development. Sadly, the museum was shuttered upon his death in 1907. “The Sheldon Museum came back to life in the 1930s, when Middlebury College’s W. Storrs Lee and art historian Arthur K.D. Healy inspected the building and started to look at the collection in detail. They were amazed by its quality and rallied a group of townspeople to help restore the old museum.”

In 1972, the Board of the museum was concerned about losing the valuable paper archive, which is considered the best documentation of a particular community in the entire region. This documentation is both meticulous and broad at the same time. Therefore, the Board decided to build a separate space to house the archive, which was followed by an environmentally controlled vault to preserve it. The Board feared that if the archive was left in the Sheldon Museum’s original 1829 building, it would be destroyed.

The Research Center “was a pretty large initiative, which was very costly in 1972 for a small community. Here we are fifty years later,” said Eva Garcelon-Hart, Stewart-Swift Research Center Archivist. “It was a fairly heroic act on the part of the community.”

“Henry Sheldon’s founding of the museum was an individual act of an inspired collector. The creation of the Research Center is a great example of the community coming together to invest in its heritage for future generations,” said Curator Ric Kasini Kadour. “Fifty years ago, the community founded this Research Center, built its building, and made the material it holds accessible to everyone. That’s a caring community in action.

Taylor Rossini, Henry Sheldon Museum Collections Associate, said, “As a non-profit and a local museum, we only have the ability to keep stewarding and preserving these objects as long as the community is invested in that venture. If people don’t want to support the museum, don’t donate, and lose interest, this whole thing falls apart. There’s a way in which the members of the community are truly active stakeholders in this preservation project of the museum as a whole, the building and its holdings.”

“Communities are more than groups of people living next to one other. Communities are about how those people work together towards a common good. This involves the interactions between people, the exchange of goods and services, and the sharing of knowledge,” said Kadour. “Communities need a shared emotional connection. That comes from having a shared history or a shared sense of history. This is why local history museums are critical to making healthy communities. They are a place where people go to learn about the past and develop a shared sense of history.” 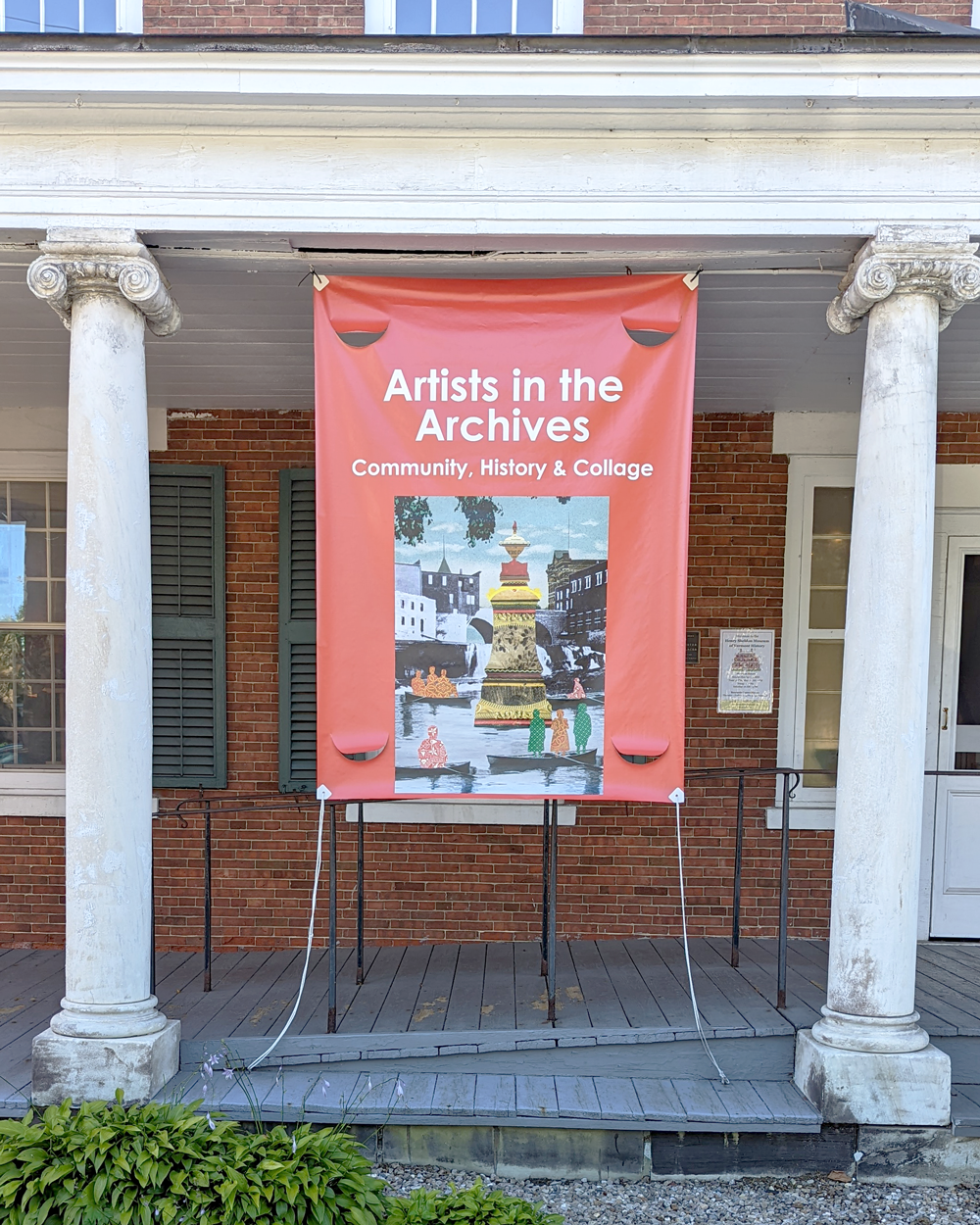 at the Henry Sheldon Museum of Vermont History 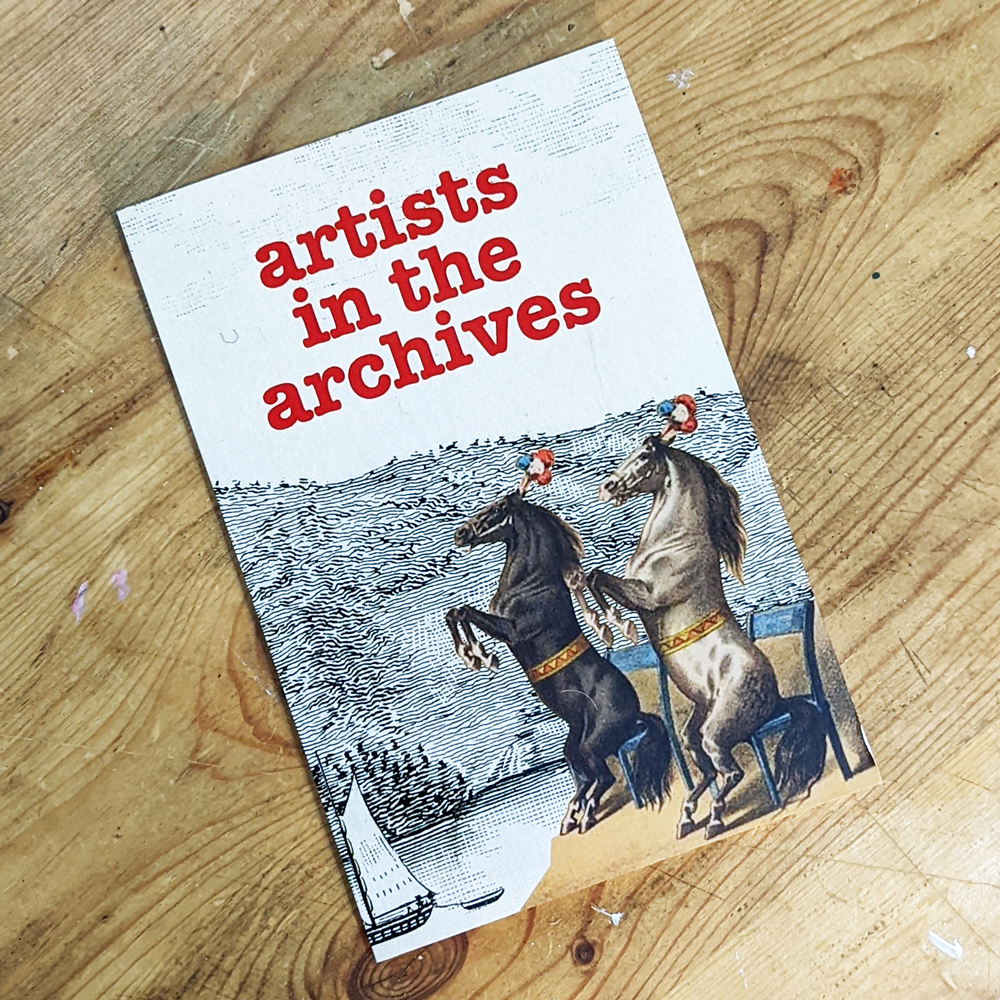 Artists in the Archives

Local history museums, archives, and collections are vital to building healthy communities and to anchoring our understanding of the world around us in the place where we live, work, and play. Collage artists have unique skills that are particularly useful in our historical moment. They understand that something beautiful, something meaningful can come from chaos; that destruction is easier than creation, which takes patience, precision, thoughtfulness, and intuition. What happens when we bring those two groups together? Artists in the Archives contains artworks and commentary as well as an extensive essay by Ric Kasini Kadour about the project. The essay reflects on the role artists can play in the interpretation and presentation of historic material in light of this history. 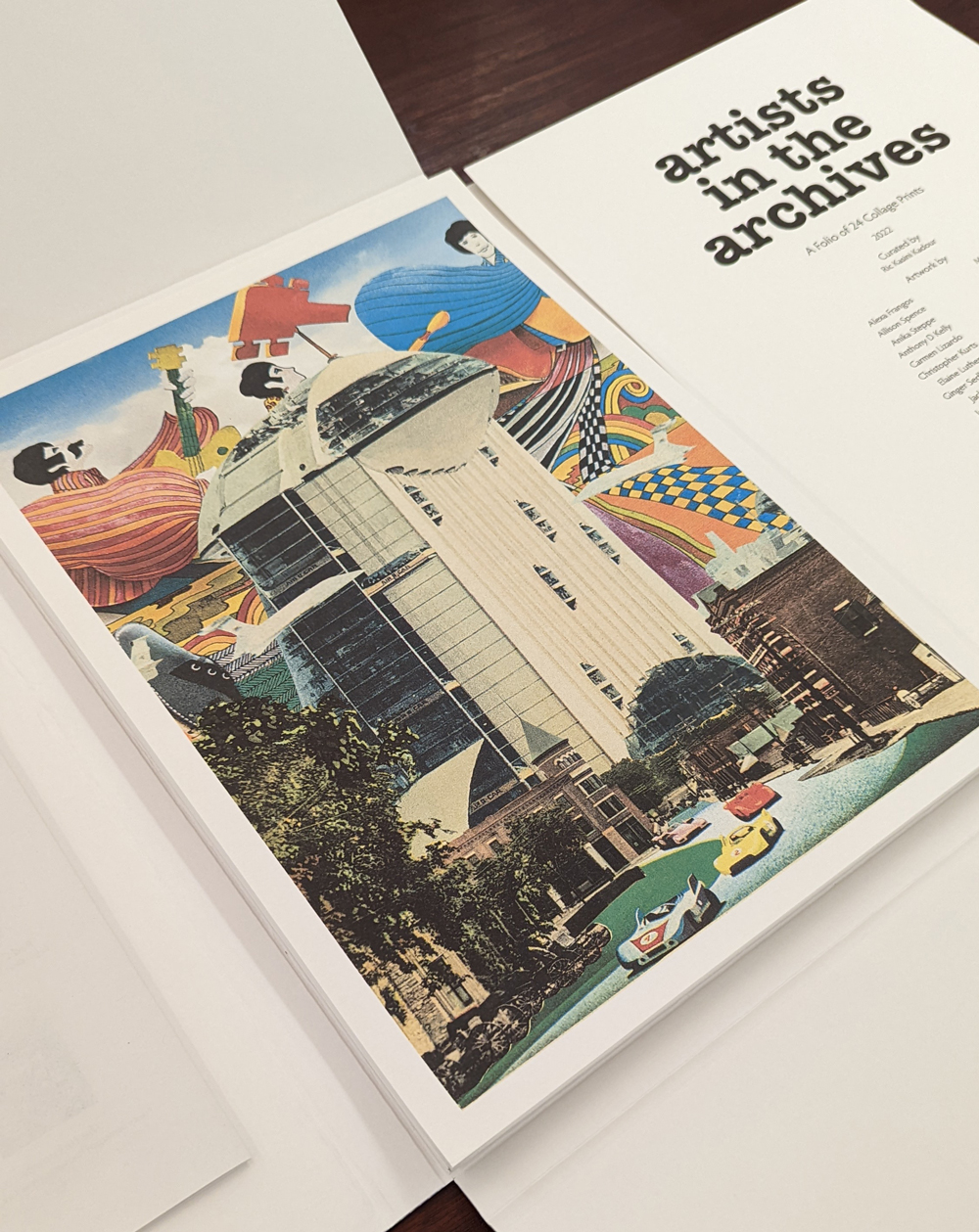 The folio “Artists in the Archive: Community” consists of twenty-four, 15”x11”, collage prints on 140lb Canson cold press watercolor paper in an edition of 5, plus one A/P. The folio is presented in an archival box with a label, a guide and a numbered title page signed by the curator. One set of folios is in the collection of the Henry Sheldon Museum. Another set is included in Kolaj Institute’s archive. The three remaining folios are available for sale with the proceeds going to support the mission of Kolaj Institute. The folio is also available as a traveling exhibition. Please send an email to inquire about purchasing folio. 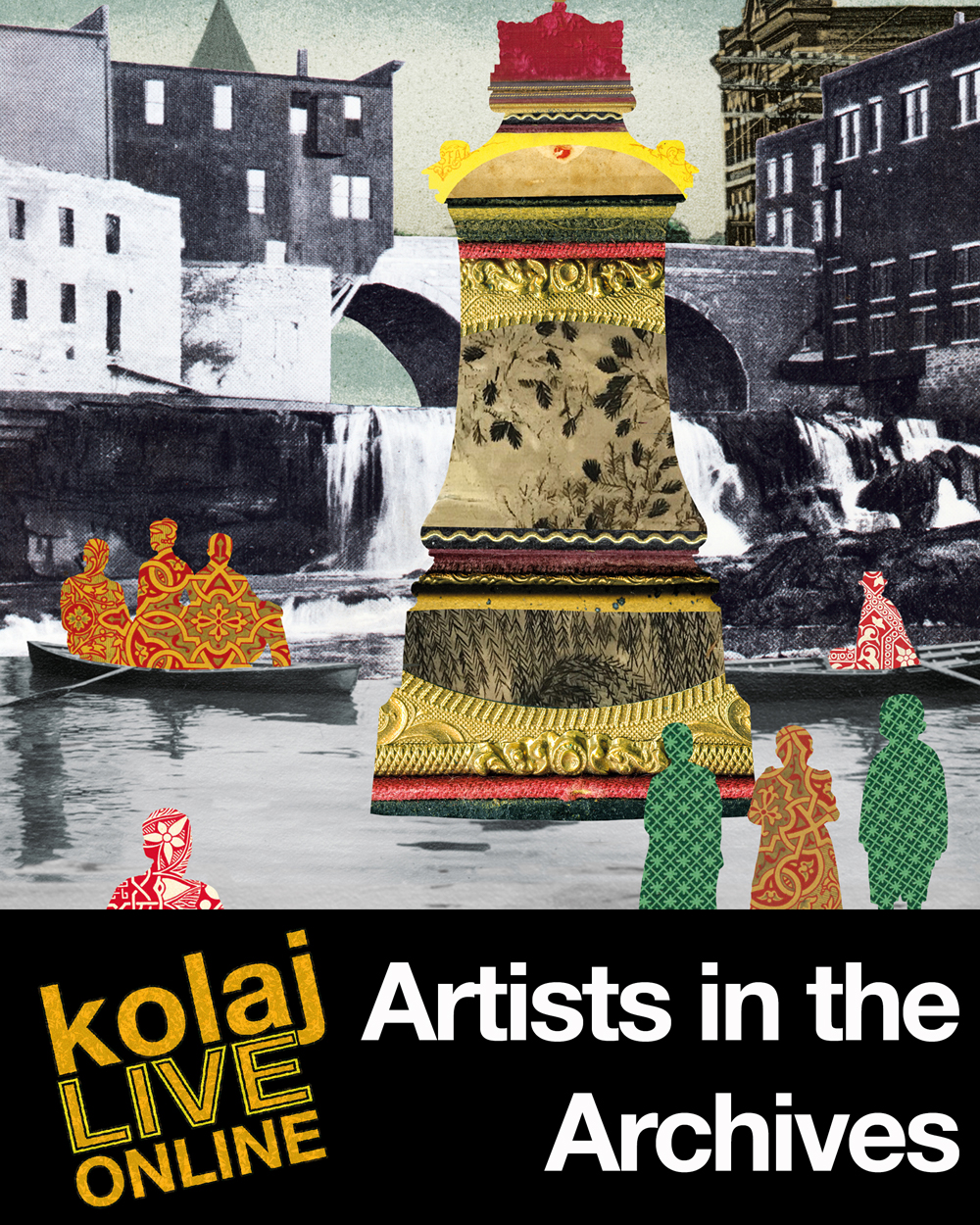 In Fall 2022 and Spring 2023, Kolaj Institute is presenting a series of Kolaj LIVE Online events in partnership with the Henry Sheldon Museum’s Stewart-Swift Research Center as part of the exhibition, “Artists in the Archive”. On the occasion of the 50th anniversary of the Stewart-Swift Research Center, the Henry Sheldon Museum of Vermont History invited an international network of collage artists to engage with historic material in the archive and to create a folio of collage prints that reflect on the idea of community in a 21st century world.

Kolaj LIVE Online is a series of virtual programs in the form of forums, panels, workshops, artist talks, studio visits, and other activities that allow people to come together, learn and talk about collage, and connect in real time to the collage community. Our goal is to bring the community together in a spirit of mutual support and fellowship. 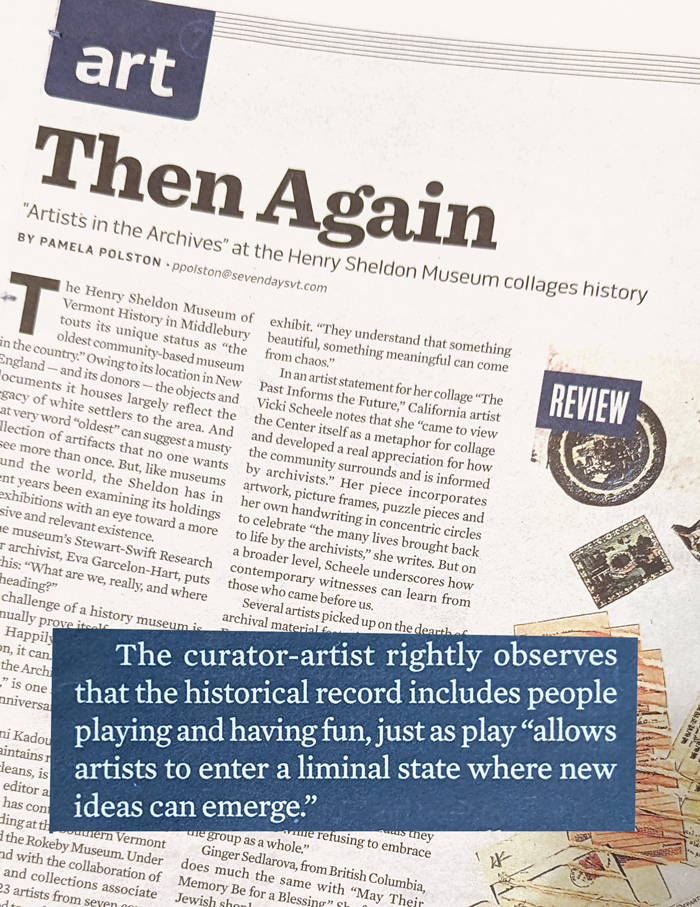 Pamela Polston reviewed the exhibition, “Artists in the Archive: Community” at the Henry Sheldon Museum in the 26 October 2022 edition of Seven Days. 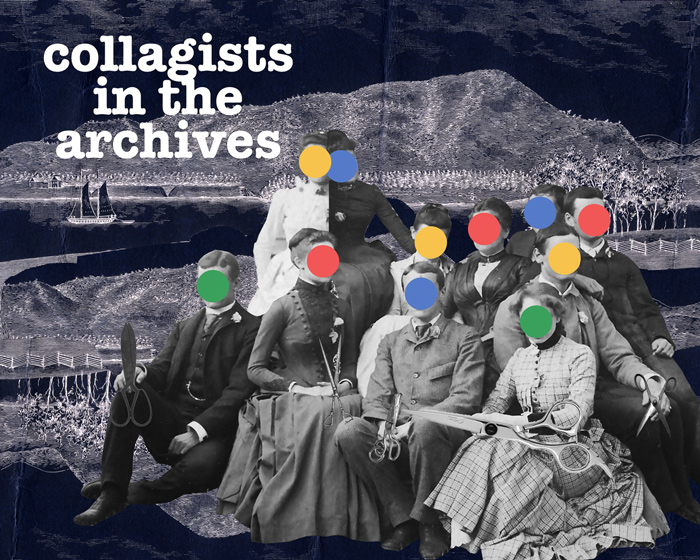 Collagists in the Archive Residency

The Residency looked at collage practice from a theoretical point of view and invited artists to examine their approach to making artwork. They considered how collage is defined and how the medium functions as contemporary art. Against this foundation, the Residency considered the role of source materials and how they shape artwork and the potential ways in which the artwork is seen.